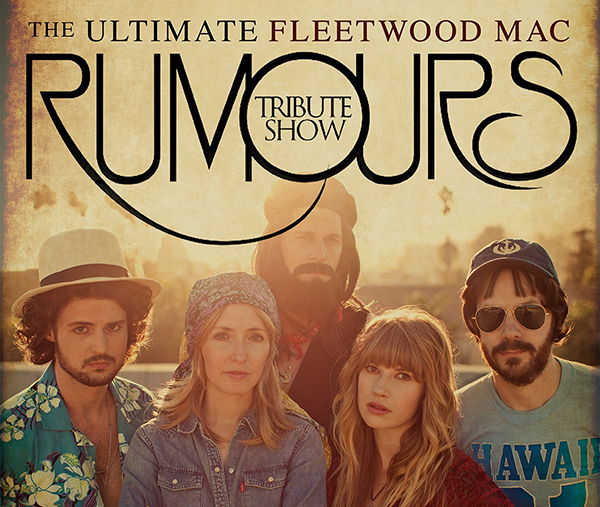 VaughnCo Entertainment is proud to present “Rumours: The Ultimate Fleetwood Mac Tribute Show”, based in Los Angeles, California. The group recreates the legendary band in its youthful heyday from 1975-1979. “It’s been said imitation is the sincerest form of flattery. I say THANK YOU!”- Richard Dashut, Record Producer of Fleetwood Mac albums, including: Rumours, Tusk, Live, Mirage, Tango In The Night, and Time.After finding huge success in Los Angeles, selling out their regular Roxy Theatre performances month after month, the band moved from the world famous Sunset Strip to Casinos, Theatres, and clubs all over Canada and the United States. Rumours has meticulously put together a show that spares no detail. From period accurate equipment and costumes to spot on characterizations and musical performances, “ Rumours” takes you back to a time when music was still an unbridled cultural experience and bands weren’t afraid to put on a show.Relive the rock and roll magic with “Rumours: The Ultimate Fleetwood Mac Tribute Show”!

We use cookies on our website to give you the most relevant experience by remembering your preferences and repeat visits. By clicking “Accept”, you consent to the use of ALL the cookies.
Cookie settingsACCEPT
Manage consent

This website uses cookies to improve your experience while you navigate through the website. Out of these, the cookies that are categorized as necessary are stored on your browser as they are essential for the working of basic functionalities of the website. We also use third-party cookies that help us analyze and understand how you use this website. These cookies will be stored in your browser only with your consent. You also have the option to opt-out of these cookies. But opting out of some of these cookies may affect your browsing experience.
Necessary Always Enabled
Necessary cookies are absolutely essential for the website to function properly. These cookies ensure basic functionalities and security features of the website, anonymously.
Functional
Functional cookies help to perform certain functionalities like sharing the content of the website on social media platforms, collect feedbacks, and other third-party features.
Performance
Performance cookies are used to understand and analyze the key performance indexes of the website which helps in delivering a better user experience for the visitors.
Analytics
Analytical cookies are used to understand how visitors interact with the website. These cookies help provide information on metrics the number of visitors, bounce rate, traffic source, etc.
Advertisement
Advertisement cookies are used to provide visitors with relevant ads and marketing campaigns. These cookies track visitors across websites and collect information to provide customized ads.
Others
Other uncategorized cookies are those that are being analyzed and have not been classified into a category as yet.
SAVE & ACCEPT